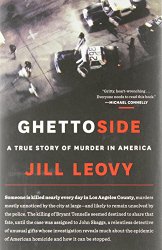 NEW YORK TIMES BESTSELLERA masterly work of literary journalism about a senseless murder, a relentless detective, and the great plague of homicide in America   On a warm spring evening in South Los Angeles, a young man is shot and killed on a sidewalk minutes away from his home, one of the thousands of black Americans murdered that year. His assailant runs down the street, jumps into an SUV, and vanishes, hoping to join the scores of killers in American cities who are never arrested for their crimes.   But as soon as the case is assigned to Detective John Skaggs, the odds shift.   Here is the kaleidoscopic story of the quintessential, but mostly ignored, American murder—a “ghettoside” killing, one young black man slaying another—and a brilliant and driven cadre of detectives whose creed is to pursue justice for forgotten victims at all costs. Ghettoside is a fast-paced narrative of a devastating crime, an intimate portrait of detectives and a community bonded in tragedy, and a surprising new lens into the great subject of why murder happens in our cities—and how the epidemic of killings might yet be stopped.   Praise for Ghettoside  “[Jill Leovy writes] with grace and artistry, and controlled—but bone-deep—outrage in her new book. . . . Ghettoside, if there’s any justice, will be the most important book about urban violence in a generation.”—David M. Kennedy, The Washington Post “Moving and engrossing.”—San Francisco Chronicle   “A serious and kaleidoscopic achievement . . . [Leovy is] a crisp writer with a crisp mind and the ability to boil entire skies of information into hard journalistic rain.”—Dwight Garner, The New York Times   “Leovy’s relentless reporting has produced a book packed with valuable, hard-won insights—and it serves as a crucial, 366-page reminder that ‘black lives matter.’ ”—The New York Times Book Review   “Masterful . . . gritty reporting that matches the police work behind it.”—Los Angeles Times“Functions both as a snappy police procedural and—more significantly—as a searing indictment of legal neglect . . . Leovy’s powerful testimony demands respectful attention.”—The Boston Globe   “A compelling analysis of the factors behind the epidemic of black-on-black homicide, and the beginnings of a policy prescription for tackling it . . . an important book, which deserves a wide audience.”—Hari Kunzru, The Guardian   “Ghettoside has many successes: its complicated portrait of the LAPD, the humanity it lends to the families of murder victims, and its ability to engage readers from a historical and current-day context (the sundry facts Leovy provides throughout the book never overwhelm).”—Jason Parham, Gawker   “A brave book . . . It is not often that I pick up a work of non-fiction and picture the movie unfolding before my eyes. . . . [Ghettoside] offers a calm dissection of America’s oldest epidemic. . . . [Leovy’s] knowledge makes for lapidary prose that crackles with insight. It is also deeply humane.”—Financial Times   “Penetrating and heartbreaking . . . Ghettoside points out how relatively little America has cared even as recently as the last decade about the value of young black men’s lives.”—USA Today

Sci-Fi Baby Names: 500 Out-of-This-World Baby Names from Anakin to Zardoz
Fantasy Football for Winners: The Kick-Ass Guide to Dominating Your League From the World’s...
Glutton for Pleasure
36 Nursing Cheat Sheets for Students
The Wrinkle in Time Quintet Boxed Set (A Wrinkle in Time, A Wind in the Door, A Swiftly Tilting P...
1001 Legal Words You Need to Know (1001 Words You Need to Know)