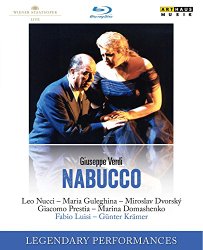 Wiener Staatsoper 2001 - After personal tragedies and the fiasco of his last opera Un giorno di regno, Verdi wanted to give up composing for ever. Fortunately he made a further attempt: Nabucco. His fi rst real success, the fi rst genuine ''Verdi opera'', was born. Nabucco the complex story of Nebuchadnezzar the King of Babylon, who proclaims himself God and is hereon afflicted with madness remains a success with audiences. The renowned director Günter Krämer paid particular attention to the interpersonal component of the opera accentuating the conflict-ridden king's loss of power as the core. His Nabucco is the tragedy of a mighty ruler. Compared to the innumerable opulent productions of Nabucco, he concentrated on fine imagery and profundity, turning the focus onto the characters by performing on a nearly empty stage. Leo Nucci, the baritone well known at all the great opera houses of the world, is Nabucco. After experiencing him at the Vienna State Opera, a critic wrote of his ''fascinating timbre'' and ''intense and plausible acting''. Maria Guleghina, who performs Abigaille, is one of the most celebrated and acclaimed sopranos of the world. She has been described as ''Russian soprano with Verdi flowing through her veins''. Supported by a distinguished cast (Marina Domashenko, Miroslav Dvorský, Giacomo Prestia) this Nabucco is a must for opera lovers.