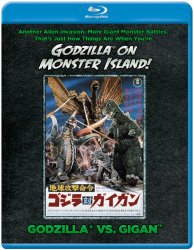 When alien invaders, plans for a children's theme park and four giant monsters with six heads between them all collide, the result is the inevitable battle for the fate of the Earth. At least, that's how it is for Godzillar, who teams up with his former spiky foe AnguirusT for a tag team match against two of his greatest adversaries: the legendary three headed King GhidorahT and GiganT, the cyborg hench-monster for insidious insect aliens whose plot to wipe out all human life is cleverly disguised as plans for the construction of a new children's theme park. Unfortunately for the bug's diabolical designs, their secret monster control codes are accidentally discovered by comic book artist Gengo Kotaka, who broadcasts the master tape and brings Team Godzillar into play. It's not going to be an easy fight, though, as the odds are four heads to two, and King GhidorahT's one of Godzillar's toughest opponents. With his cybernetic weaponry GiganT is equally ruthless, and his alien masters are as hard to kill as the cockroaches they resemble. Will Earth's biggest defenders finally fall? Or will Godzillar, and insecticide, triumph over all? Find out in GODZILLAr VS. GIGANT!