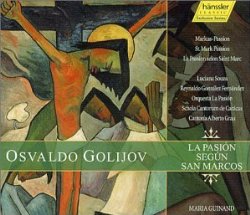 Osvaldo Golijov was born on December 5, 1960, in La Plata, Argentina, and now lives in Newton, Massachusetts. The score is dedicated "To the miracle of faith in Latin America, that lives through María Guinand and the Schola Cantorum de Caracas." Osvaldo Golijov grew up in an Eastern European Jewish household in La Plata, a provincial capital of half a million people about fifty kilometers from Buenos Aires in officially Catholic Argentina. While on a fellowship to the Tanglewood Festival, Golijov became acquainted personally with the Kronos Quartet, who performed there in 1990 and 1992. This relationship became a central one to Golijovs ever-increasing profile as a composer. Golijov wrote Kvakarat, which the quartet later recorded, for Kronos and cantor Misha Alexandrovich, and in 1997 Kronos and clarinetist David Krakauer recorded Golijovs Klezmer-accented The Dreams and Prayers of Isaac the Blind. When approaching the composer with the commission, Rilling encouraged Golijov draw upon his own experienceas a Jew living in an officially Catholic country; as an artist with an interest in a broadly eclectic range of style and media; as a Spanish-speaking composer of Eastern European parents, now living in the United States, and so onin discovering a personal perspective on the twice-told (or rather four-times-told) story. The text of La Pasión Según San Marcos is composed of portions of The Gospel According to Mark, the Old Testaments Psalms and Lamentations, and Spanish poetry. Golijov matches the pared-down, vox populi directness of St. Marks account in the directness of his musical idiom, particularly in his appropriation of popular Latin American folk and dance music. He uses these forms as models for individual numbers with the larger work, which itself shares much in common with the structures of the Passions of Bach. From the Steve Reichian pulsations of the opening bars, to the sultry rhythms accompanying Jesus betrayal to the other-worldly setting of the Kaddish (the Jewish prayer for the dead) with which the work concludes, Golijovs score is vibrant with energy, exoticism and PASSION! ►This is the ONLY composer authorized recording with the original ensemble!◄

Australia
H.P. Lovecraft’s The Shadow Out of Time
Livin’
Something Rotten
Redeemer: A Nashville Tribute to Jesus Christ
The Guitar Song