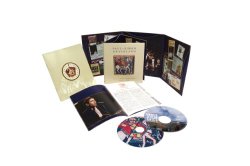 In 1986, Graceland sold 14 million copies worldwide and garnered both the Album and Song of the Year Grammy in 1987. Simon and the members of Ladysmith Black Mambazo performed on Saturday Night Live and appeared on the cover of Rolling Stone. It generated three hit singles and it kept Paul Simon and the Graceland tour on the road for five years. Its music was heard across the globe. Today, its music and its reputation still reach generations of music enthusiasts yet so many are unaware of how pivotal that one album was during the 1980s, how it helped birth the idea of World Music and revived the career of one of America's most important songwriters. How it influenced the political progress of South Africa a country divided by institutionalized racism, causing and then transcending years of controversy. How in fact the album came to be in the first place.Graceland's 25th anniversary CD/DVD features the original album with bonus tracks, the documentary film (Under African Skies), deluxe book featuring unreleased photos and new liner notes.