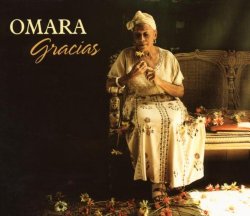 Omara Portuondo, the Cuban diva and star of the Buena Vista Social Club among others, celebrates her 60-year musical career with a brand new album. With Gracias, Portuondo's aim is to revisit the songs that she has found most moving and to work with the songwriters she most admires, such as Silvio Rodríguez, Pablo Milanés and Jorge Drexler, the latter being the composer of the album's title-song, specially dedicated to Portuondo. These are not, however, the only star guests on this recording. If the list were not already impressive enough, other great names include Chucho Valdés (who performs a song composed by Portuondo's son), the brilliant African musician Richard Bona and the Brazilian maestro Chico Buarque. And what better way to celebrate such an auspicious occasion than to recruit a first-class quintet? The group consists of three musicians that Portuondo has worked with in the past - pianist Roberto Fonseca, guitarist and musical director Swami Jr. and percussionist Andrés Coayo - along with the Israeli double bassist Avishai Cohen and Hindu percussionist Trilok Gurtu.