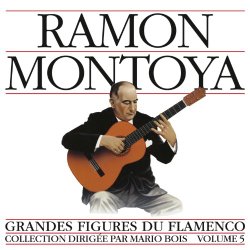 Born of gypsy origin near Toledo, Ramon Montoya (1880-1949) frequented the Cafe de la Marina as a child, endlessly watching the fingers of the great fin de siecle guitarists. He was the cousin of Carlos Montoya, who pursued a resounding American career; Ramon never learned how to read music himself, but created his own technique, using his creative genius to synthesize all that he saw and heard. He was quickly sought out by the greatest Flamenca artists, such as Antonio Chacon (who considered Montoya to be the finest accompanist), Nina de los peines, Argentinita and Joselito, but for a long time he ignored international agents and the major concert halls, where he would have been a smash. Montoya gave guitar lessons to Marius de Zayas, whose son Rodrigo de Zayas become a great and well known Seville musicologist, a specialist in classical Andalusian music. In 1963, Marias de Zayas suggested that Montoya, who had only recorded accompaniment, record his first solo album in Paris: ''Arte clasico flamenco''. A triumphal concert was given at the Casino in Biarritz on September 7, 1936. The man who agreed to produce the records underwritten by de Zayas reissued here - was Levy-Alvarez, head of ''La Boite a Musique'' in Paris.