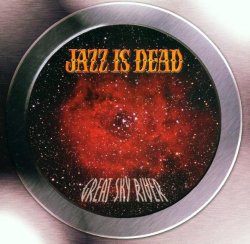 Made up of seasoned players like Jimmy Herring from the Aquarium Rescue Unit, former Santana bassist Alfonso Johnson, and Dixie Dregs alums keyboardist T Lavitz and drummer Rod Morgenstein, Jazz Is Dead doesn't function so much as a Grateful Dead cover band than as an outfit that uses Dead gems as jumping-off points for a sonic journey that leads the listener not into well-traveled grooves, but into an enthralling soundscape without rules, vocals, or fixed time signatures. Superior playing and that special brand of ESP that all good jam bands possess further enrich these adroit and artful reinterpretations of Dead songs. "St Stephen" and "The Eleven" come out sounding like a cross between Indian bazaar music and the Allman Brothers (Herring spent a year filling in for an ailing Dickie Betts in the Allmans). Recorded live at the IMAC Theater in Huntington, New York, this disc captures all the nuances and guitar wizardry that Herring can wring out of his instrument, but one suspects that this band is even more spectacular live. --Jaan Uhelszki