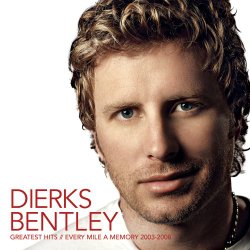 Five years, five #1 hits, six Grammy nominations, and one CMA Horizon Award later, Platinum-selling country superstar Dierks Bentley brings you a collection of his fan's favorites on Greatest Hits/Every Mile A Memory 2003-2008. The compilation features ten of Dierks' most recognizable hits, two brand new songs, and five live songs selected exclusively by his fans! Dierks has given his loyal fans creative control of this project, allowing them to handpick the content of the album, cover art, and the album title. Participating fans will then have their names listed in the liner notes of the project as executive producers. Dierk says, 'I can't think of a better way to get my fans involved than to have them actually act as executive producers of this record'.

Do you want ot get the Greatest Hits/Every Mile A Memory?