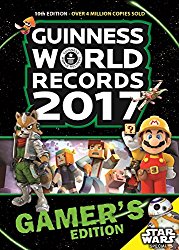 It’s time to celebrate the 10th anniversary of the Guinness World Records: Gamer’s Edition! With over four million copies sold, this is the ultimate annual for every gaming fan. It’s bursting with the latest facts and stats on your favorite games from the futuristic soccer action of Rocket League to the psychedelic paint battles of Splatoon. And as Star Wars mania explodes once again, we explore everything Jedi in a special feature section. Plus, you’ll get a sneak peek at all-new games from the ever-evolving gaming universe! Get an inside look at the indie game scene, the big-money world of eSports, and a celebration of 25 years of Mario Kart. There’s everything from space shooters such as Destiny, to RPGs such as Fallout 4, to the hit sport series FIFA and Madden. We’ve got sims, strategy games, and horror titles, and we also take a look at the toys-to-life phenomenon. From League of Legends to The Legend of Zelda, it’s all here in the 2017 edition of Guinness World Records: Gamer’s Edition!

Calming Your Anxious Mind: How Mindfulness and Compassion Can Free You from Anxiety, Fear, and Panic
Eliciting Sounds: Techniques and Strategies for Clinicians
The Interesting Narrative and Other Writings: Revised Edition (Penguin Classics)
Twenty Dinners
The Horse
Lonely Planet Morocco (Travel Guide)