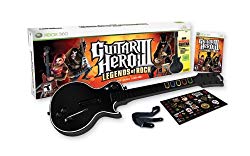 Product Description The third game from the Guitar Hero series is going to rock your face off. You will channel your inner guitar god as you thrash your way through all sorts of venues. In addition to standard Guitar Hero features you know and adore, this game has all kinds of killer new options such as the new multiplayer action-inspired battle mode, grueling boss battles, a bevy of exclusive unlockable content, and authentic rock venues. The expanded online multiplayer game modes will also allow axe-shredders worldwide to compete head-to-head for true legendary rock status. Best of all, check out the new songs! Fresh downloadable content will be offered on multiple platforms, and players can now shred to a set list from many of the greatest rock songs ever recorded. Featured hits include: Rock And Roll All Nite (as made famous by Kiss) School's Out (as made famous by Alice Cooper) Cult of Personality (by Living Colour) Barracuda (as made famous by Heart) This game comes bundled with the all-new wireless Gibson Les Paul guitar controller. The exclusive Gibson guitars include innovative features such as removable faceplates allowing fans to personalize their guitars making them their own, and a new button color design that will be integrated for an even greater authentic feel and rock experience.