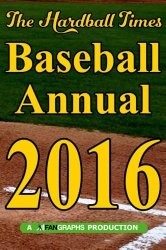 The Hardball Times Annual 2016 is the ultimate baseball annual...the "MVP of baseball annuals." Now in its 12th year, this year's edition contains more than 30 articles from some of the best-known writers in baseball today, such as... Dave Cameron Jeff Sullivan Mitchel Lichtman Carson Cistulli Eno Sarris Erik Malinowksi Kiley McDaniel ...and many other great writers. Topics include complete coverage of the 2015 season, including the games/series that swung the balance of each division, unique takes on baseball history and cutting-edge sabermetric analysis. When you read The Hardball Times Baseball Annual 2016, you'll discover: What the battlegrounds are for the next collective bargaining agreement Which umpires are the most and least consistent Why the 1904 World Series was cancelled New values for trading prospects Analysis of pitcher command using previously unreleased COMMANDf/x data The physics of the longest home runs How the New York Mets’ 2015 starting rotation compares to its predecessors Analysis of catcher pop time using previously unreleased Statcast data If you're a baseball fan yearning to keep that flame burning during the offseason, The Hardball Times Baseball Annual is for you. As Sports Weekly said, "There are several baseball books that come out every year for the holiday season, but none as well-rounded and complete as The Hardball Times Baseball Annual."