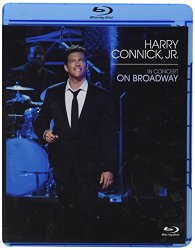 After a critically acclaimed, 15 day sold-out run on Broadway comes the release of HARRY CONNICK, JR. IN CONCERT ON BROADWAY. The show left critics raving and fans cheering.Over the past two decades, Harry Connick, Jr. has proven to be among the world's most successful and multi-talented artists. Harry first reached a mass audience as a pianist, singer and bandleader, securing his place as a renaissance man and versatile entertainer. His career has been studded with awards and recognition, including several multi-platinum and gold albums; 25 million albums sold around the world; Grammy and Emmy Awards; and Tony nominations for both his work as a composer and for his lead acting role. On the heels of a sold out summer tour across the country, Harry Connick, Jr. dazzled audiences with a two-week run on Broadway. - "Dynamite! Easily the most remarkable demonstration of music presently on Broadway." - Variety - "Harry scores a knockout!" New York Times - "It was like watching Clark Kent turn into Superman." New York PostHARRY CONNICK, JR. IN CONCERT ON BROADWAY was filmed in hi-definition on July 30th & 31st, 2010 at the Neil Simon Theatre on Broadway in New York City. The performance is available in four configurations: DVD, CD, DVD/CD deluxe set, and Blu-ray.