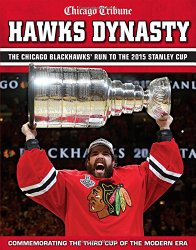 The Chicago Blackhawks’ 2015 postseason run culminated in the team’s third Stanley Cup since 2010, the sixth championship in the Original Six franchise’s history. The road to hoisting the Cup was the bumpiest of Chicago’s three titles under head coach Joel Quenneville. The Blackhawks finished third in the NHL’s Central Division following a season in which key players, including Patrick Kane and Corey Crawford, missed time due to injury. But the Hawks stormed past Nashville, Minnesota and Anaheim to set up a Stanley Cup Final matchup against a young, fast Tampa Bay Lightning team.  With new heroes emerging throughout the postseason, the Blackhawks battled through a tough, six-game first round series against Nashville before sweeping the Minnesota Wild to reach the Western Conference Final. In an epic series that featured three overtime contests, the Blackhawks overcame a 3-2 deficit to defeat the Ducks in seven games to advance to the Stanley Cup Final.  Packed with one of a kind analysis and stunning photography from the Chicago Tribune, Hawks Dynasty takes fans through the Blackhawks’ journey, from the crushing loss to the Los Angeles Kings in Game 7 of the Western Conference Finals in 2014 through the final seconds against Tampa Bay. This commemorative edition also includes profiles of Kane, Crawford, Jonathan Toews, Duncan Keith, Brandon Saad and Scott Darling.

Do you want ot get the Hawks Dynasty: The Chicago Blackhawks’ Run to the 2015 Stanley Cup?