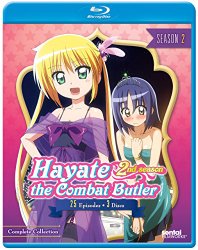 Ever since he first met Nagi Sanzenin, Hayate Ayasaki's life has become increasingly more crazed and chaotic. Which is a bit of a problem, since, as the eccentric heiress' butler/personal bodyguard, he's theoretically supposed to be a stabilizing and protective influence. Unfortunately, Nagi and her friends attract trouble the way dropped lollipops attract dirt, and if Hayate has to take a couple of nasty licks along the way, that's just part of the job. The real sucker punch, though, is that Nagi's increasing attraction to Hayate himself is getting precariously close to transforming their professional relationship into something far less professional and much more like a relationship. Is Hayate up for the emotional perils of a round of "upstairs, downstairs"? Or will the purely physical dangers of life on Her Majesty's Domestic Service do him in first? Get ready to spit and polish in the eye of the devil as the groom and doom continues in the second series of HAYATE THE COMBAT BUTLER!!