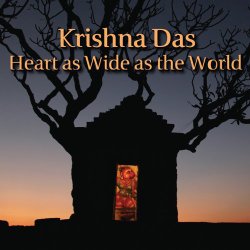 As the best selling chant artist of all time, Krishna Das has sold more than 300,000 records, and continues to engage enthusiastic audiences around the world. He has headlined venues from concert halls to yoga studios for sold out crowds of 1,500 in cities across America,throughout Europe and most recently in South America. He has been recording his popular and much-beloved CDs of devotional Indian Chants since 1996.Renowned for making kirtan chant more accessible to Westerners, Krishna Das, has been called the "chant master of American Yoga" by The New York Times, and the "Pavarotti of Kirtan" by Yoga Journal. His groundbreaking music is energized with modern grooves and harmonies to create a soulful practice that is eminently accessible to modern hearts, while staying true to the path of Bhakti Yoga.Heart as Wide as the World includes all brand new chants and is Krishna Das' first album recorded entirely in the studio in more than 10 years. A collaboration with acclaimed producer David Nichtern it also includes musician Jerry Marotta on drums & percussion and an array of unique instruments including the dotar, tablas,esraj and bansuri flute.