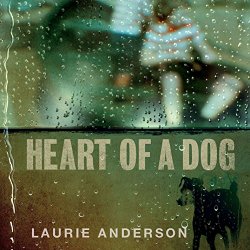 The complete soundtrack recording of Laurie Anderson's newest piece, Heart of a Dog, is available from Nonesuch Records on October 23, 2015. Anderson was recently commissioned by the European TV network Arte to create a feature film—her first in 30 years. Her response was a personal essay entitled Heart of a Dog, a work encompassing joy and heartbreak and remembering and forgetting, at the heart of which is a lament for her late beloved dog Lolabelle. Heart of a Dog has been shown at the Telluride, Venice, and Toronto Film Festivals to critical praise, with the New York Times calling it a "philosophically astute, emotionally charged meditation on death, love, art and dogs." The movie will be screened at the New York Film Festival on October 8, before opening theatrically at New York's Film Forum on October 21. It also will be shown on HBO in early 2016.In addition to Anderson's inimitably thoughtful narration, Heart of a Dog includes musical excerpts from several of her pieces—"The Lake" and "Flow" from Homeland (2010), "Beautiful Pea Green Boat" from Bright Red (1994), "Rhumba Club" from Life on a String (2001), excerpts from Landfall (2011) with Kronos Quartet—as well as the film's closing song "Turning Time Around," written and performed by Anderson's late husband, Lou Reed.From October 2 through 4, New York's Park Avenue Armory presents Anderson's complementary piece, Habeas Corpus—a site-specific work that interweaves film, sculpture, music, and video to examine the story of Mohammed el Gharani, one of the youngest detainees at Guantanamo Bay. Open to the public during the day, the installation serves as a meditation on time, identity, surveillance, and freedom—themes also explored in Heart of a Dog. The evocative setting is also activated at night with a celebratory performance and dance party with Syrian singer Omar Souleyman, including a new sonic composition created by Merrill Garbus of tUnE-yArDs with Anderson. The result is a new work that spans the worlds of visual art, performance, and experimental music.