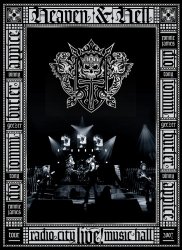 Fans lucky enough to score tickets to Heaven And Hell's Radio City Music Hall performance on March 30, 2007 - the concert sold out in a matter of minutes - were fortunate witnesses to the glorious return of Ronnie James Dio, Tony Iommi, Geezer Butler, and Vinny Appice. Onstage in the U.S. for the first time in 15 years, the group let loose an onslaught of iconic metal spotlighting Dio's memorable tenure with Black Sabbath. Rhino relives every bone-crushing riff and thunderous howl from the evening with the release of Live From Radio City Music Hall on DVD. Live From Radio City Music Hall captures the band bashing its way through some of the Dio era's best. The quartet also performed a pair of new songs - the hit single 'The Devil Cried' and 'Shadow Of The Wind' from the Rhino CD Black Sabbath: The Dio Years. The DVD includes the entire show shot in breathtaking HD, as well as a tour documentary and other bonus footage.