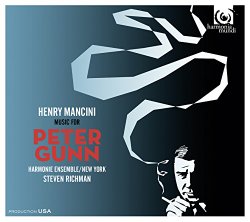 The classic TV detective series Peter Gunn, which ran from 1958 to 1961, is probably best remembered today due to the show's trendsetting score written by Henry Mancini and inspired by the West Coast Cool jazz style. On Music for Peter Gunn, GRAMMY-nominated conductor Steven Richman and the sensational Harmonie Ensemble/New York (joined by ace old-school improvisers Lew Soloff and Lew Tabackin), place their own stamp on Mancini's iconic orchestrations. It follows in the footsteps of Richman's and Harmonie Ensemble's previous bestselling releases Gershwin by Grofe (which landed on the Billboard charts in the top ten) and Ellington/Tchaikovsky Nutcracker Suites.

Do you want ot get the Henry Mancini: Music for Peter Gunn?