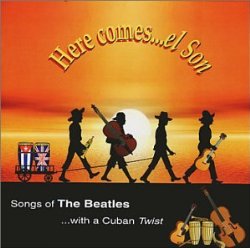 Songs of THE BEATLES…with a Cuban TWIST. Here Comes…el Son merges the spirit of The Beatles with the soul of Cuban music. It offers Beatles fans a rare bifocal musical experience: familiar Fab Four tunes rendered in grassroots Afro-Cuban rhythms. This musically rich CD also presents the music enthusiast with an exotic compilation of songs of the most famous Rock ’n Roll group in the world in styles never heard before. HISTORICAL FACTS Banned in Cuba during the early years of the revolution, Beatles music managed to break through and establish a following that endures to this day in Cuba. HCES emerges from that following as the FIRST record of Beatles songs played in traditional Cuban musical rhythms. It is also the FIRST record performed in English by Cuban musicians residing in Cuba.

Do you want ot get the Here comes…el Son – Songs of The Beatles with a Cuban TWIST?