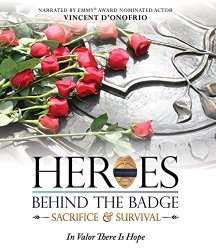 The second installment of this powerful documentary series takes place in various corners of America and follows the stories of two officers who paid the ultimate price, as well as the stories of three severely injured officers who are now fighting their way through the painstaking process of recovery. The film takes place in various corners of America, including Mt. Rainier WA, New York, Ft. Worth TX, Clairton PA and Moab UT. The film also takes viewers to New York City's 9/11 memorial site, where many officers perished on that fateful day in 2001, and to National Police Week in Washington, DC, where the fallen are honored each year. Directed by British Academy Award winning filmmaker, Wayne Derrick and narrated by Emmy Award nominee Vincent D'Onofrio, this feature length documentary film is a tribute to the heroes of law enforcement who have suffered through life-threatening injuries and are fighting their way back, and to those who are gone but never forgotten.