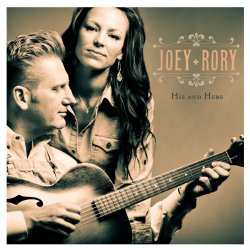 In signing up for CMT s competition show Can You Duet in 2008, Rory Feek wanted one thing: for the world to know his wife Joey, and thepower of her voice. My whole hope was: I m going to get eliminated immediately, but they might hear her sing, he says, now four years intoa career as her Joey+Rory duo partner, and a decade into life as her proud husband. The couple far surpassed his expectations, Joey+Rorytaking third place and subsequently signing with Vanguard/Sugar Hill Records. Over two studio albums 2008 s The Life of A Song, fromwhich single Cheater Cheater is culled, and 2010 s Album Number Two country fans have indeed come to know Joey s crystalline belt.They ve also come to know Joey+Rory as a couple, rooted in an 1870s Pottsville, Tenn., farmhouse, Rory writing songs and tinkering with oldcars, Joey gardening or baking bread at Marcy Jo s Mealhouse, the local restaurant she owns with sister-in-law Marcy. But with the new Hisand Hers, due out via Sugar Hill, listeners will get fully acquainted with both Joey and Rory as individually arresting lead singers,Joey taking the fore on half of the album s tracks, Rory s warm, approachable vocal helming the others.