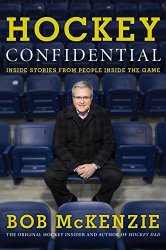 When it comes to hockey, Bob McKenzie is one of the most trusted voices in the game. No one has the access or the breadth and depth of experience. Now, in his very first book on the NHL, Bob takes readers behind-the-scenes, covering the inside stories, the lesser-known personalities, and all the events that shape this great game.Hockey Confidential is Bob’s all-access pass to the NHL. In addition to revealing the actual stats that NHL coaches and scouts use, Hockey Confidential is also about the value of family within a hockey context. An 80-yearold Don Cherry sharing precious moments with his son, Tim, at the rink; rock star Gord Downie of the Tragically Hip communing with his brothers in a lifelong love affair with the Boston Bruins; the patriarchs of the Subban and Tavares families emigrating from Jamaica and Portugal, respectively, to become household hockey names and raise great Canadian superstars; to say nothing of a teenaged Connor McDavid, leaning on his family and support system, including the incomparable Bobby Orr, to help cope with the pressures of being tabbed as the Next Big Thing in hockey; as well as Sheldon Keefe’s dramatic personal struggle to leave behind a dark and troubled past to become a better man, son, brother, husband, father and hockey coach.Karl Subban poured out his heart and soul in a long, all-encompassing interview at a Tim Hortons in Rexdale, Ontario; Tyler Dellow and myriad other advanced statistics gurus, including the legendary Vic Ferrari, made themselves available on numerous occasions to repeatedly explain their craft to a guy who barely escaped Grade 12 math; and Jari Byrski welcomed Bob into his home, where his beloved wife died and where he thought seriously about taking his own life—and might have, if not for hearing Bob’s voice on television talking about a Steven Stamkos goal.Jari Byrski? Well, that’s one of a number of reasons why the full title of the book—Hockey Confidential: Inside Stories from People Inside the Game—is actually an apt description. Jari Byrski may not be a household hockey name, but the fact that he, like so many others, work with and are well known to so many of the biggest stars and best players in the NHL means you should know them—and their stories—too.Hockey Confidential is about more than just hockey. For Bob McKenzie, whose life more or less revolves around all things puck, there’s plenty here for the hardcore hockey fan: John Tavares talking about the essence of scoring goals; Brandon Prust making sense of what it’s really like to give or take punches in a hockey fight; and the colliding worlds of old and new in the growing debate on the place of advanced statistics—or #fancystats, as many have taken to calling them. And yet what Bob also captures in writing this book is an attempt at understanding the grander and more universal themes of life and death, and the meaning or purpose of our respective journeys, and the passion and love that comes from the ice.Entertaining and insightful, Hockey Confidential is a must for any hockey fan.

For Men Only, Revised and Updated Edition: A Straightforward Guide to the Inner Lives of Women
On the Revolutions of Heavenly Spheres (Great Minds Series)
The Complete Book of Pilates for Men: The Lifetime Plan for Strength, Power & Peak Performance
Tangerine
Grunt: The Curious Science of Humans at War
Arguing with Idiots: How to Stop Small Minds and Big Government