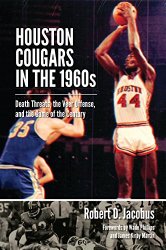 On January 20, 1968, the University of Houston Cougars upset the UCLA Bruins, ending a 47-game winning streak. Billed as the “Game of the Century,” the defeat of the UCLA hoopsters was witnessed by 52,693 fans and a national television audience—the first-ever regular-season game broadcast nationally. But the game would never have happened if Houston coach Guy Lewis had not recruited two young black men from Louisiana in 1964: Don Chaney and Elvin Hayes. Despite facing hostility both at home and on the road, Chaney and Hayes led the Cougars basketball team to 32 straight victories. Similarly in Cougar football, coach Bill Yeoman recruited Warren McVea in 1964, and by 1967 McVea had helped the Houston gridiron program lead the nation in total offense. Houston Cougars in the 1960s features the first-person accounts of the players, the coaches, and others involved in the integration of collegiate athletics in Houston, telling the gripping story of the visionary coaches, the courageous athletes, and the committed supporters who blazed a trail not only for athletic success but also for racial equality in 1960s Houston.

Do you want ot get the Houston Cougars in the 1960s: Death Threats, the Veer Offense, and the Game of the Century (Swaim-Paup-Foran Spirit of Sport Series, sponsored by James C. ’74 & Debra Parch)?

Stepbrother Bastard (The Hawthorne Brothers) (Volume 1)
Should Trees Have Standing?: Law, Morality, and the Environment
Teach Me to Do It Myself: Montessori Activities for You and Your Child
Copyright Law in a Nutshell
The Complete Beer Course: Boot Camp for Beer Geeks: From Novice to Expert in Twelve Tasting Classes
Sacred Woman: A Guide to Healing the Feminine Body, Mind, and Spirit