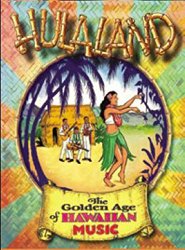 A cross section of Hawaiian music, from lap-steel great Sol Hoopii to Ella Fitzgerald, with a large helping of slack-key guitar, lush instrumentals, gorgeous singing and melodic masterpieces, some once buried in the vinyl landfill and resurrected here for the first time. Disc 1, From Hollywood to Honolulu 1931-1957 covers the early popularization of island music by native Hawaiians such as Andy Iona, who blended island melodies with swing, as well as performers one might not expect to see in this context: Louis Armstrong, Ethel Merman, Slim Whitman, Jo Stafford and Betty Boop are among those who put their spin on Hawaiian music. The second disc, Splendor in the Grass Shack, 1958-1974, finds Ukuele Ike, The Ventures, Arthur Lyman, and Martin Denny all capitalizing on the Tiki craze in the late 1950s. The set s foray into 60s Tiki and exotica includes a Hawaiian version of the 1968 Fleetwood Mac song Albatross. And to add a little modern day nostalgia, the themes from Hawaii Five-O and Hawaiian Eye are here too.Disc 3: Hawaiian Classics largely puts the spotlight on native Hawaiian musicians from the 20s and 30s, such as Kalama s Quartet, King Nawahi, Sol Hoopii, and Clara Inter, better known as Hilo Hattie. The fourth disc, Contemporary Hawaiian Music, was assembled by Robert Armstrong and features his fine guitar playing and along with other collaborators strumming their way to paradise in a contemporary fashion that gives a nod to the great music you hear on the first three discs. Featured are the cool sounds of the Coconut Trio, the Sweet Hollywaiians, Ken and Bob (Ken Emerson & Robert Armstrong) and the Joy Buzzards to name a few.