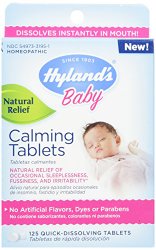 Babies get fussy. It’s a natural response to being in a totally new world. Couple that with occasional sleeplessness, and you’ve got an irritable little person that needs natural calming medicine to settle his or her system. Baby Calming Tablets are the go-to, safe and effective solution that Moms depend on, day and night. Go ahead – bring on the calm! Baby Calming Tablets that provide natural relief of occasional sleeplessness, fussiness, and irritability.