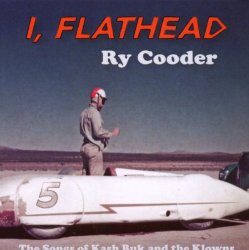 Ry Cooder's I, Flathead is the culmination of his ambitious and fascinating "California Trilogy," the last of three albums in which the singer and guitarist journeys through the real and imagined history of mid-20th century, multi-ethnic California, sampling the sounds of its barrios and byways, its nightclubs and honkytonks. The CD functions beautifully on its own, but also serves as a sort of soundtrack to the book equivalent. Abetting Cooder in his story telling is a veritable repertory of players who've appeared in the previous discs in the trilogy, among them drummer Joachim Cooder, Jim Keltner, Flaco Jimenez, Jon Hassell, Juliette Commagere and Gil Bernal.

Do you want ot get the I, Flathead?