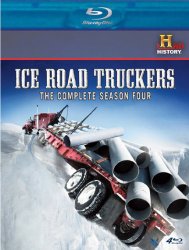 The Ice Road Truckers return to Alaska, hauling their biggest loads ever across the most dangerous terrain they've faced. But this year, trucking critically needed cargo north to the oil fields of Prudhoe Bay is just the beginning. In season four, the drivers will tackle frozen rivers and swamps out beyond the Dalton Highway, hauling supplies to some of the most remote towns of the great white north. Reigning king, Jack Jesse, looks to defend his title, and Lisa Kelly, one of the only woman truckers on the haul road, fights to prove herself in the male-dominated profession. Rookie Ray Veilleux, who recently lost his business in the lower 48, has come north to run the road and keep his struggling family afloat. And in a decades-long rivalry, veteran drivers Hugh Rowland and Alex Debogorski are back racing neck and neck. The stakes are high as the dash for cash continues.Experience all 16 episodes of this landmark series on 4 Blu-ray Discs.DISC 1: Breaking Through / The Polar Bear Returns / Facing Down The Blow / Monster Storm Over AtigunDISC 2: Trapped on Thin Ice / Danger at 55 Below / Avalanche! / Lisa s Monster MegahaulDISC 3: Blood on the Dalton / The Ace vs. The Ice / A Rookie s Nightmare / The Dalton Strikes BackDISC 4: Convoy to Hell / A Legend Meets His End / Deadly Melt / New King of the Dalton / Bonus