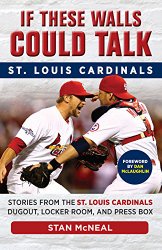 The St. Louis Cardinals are one of baseball’s most storied franchises, and as much a part of St. Louis as Anheuser-Busch and the arch. From Lou Brock to Matt Carpenter, Ozzie Smith to Yadier Molina, Bob Gibson to Adam Wainwright, from Hall of Famers to rookie busts, the Cardinals are beloved in St. Louis. In this book, Stan McNeal provides a closer look at the great moments and the lowlights that have made the Cardinals one of the baseball’s keystone teams. Through the words of the players, via multiple interviews conducted with current and past Cardinals, readers will meet the players, coaches, and management and share in their moments of greatness and defeat. This book shares stories behind such Cardinal memories as the little-known clubhouse antics of backup catcher Bob Uecker during the teams’ memorable run in the 1960s, the excitement at Busch Stadium in the 1980s as the Cardinals reached the World Series three times, and the elation of the 2006 and 2011 World Series championships.

Sick in the Head: Conversations About Life and Comedy
Relish: My Life in the Kitchen
Huckleberry: Stories, Secrets, and Recipes From Our Kitchen
Nora Roberts Cousins O’Dwyer Trilogy Boxed Set
Cheney One on One: A Candid Conversation with America’s Most Controversial Statesman
If These Walls Could Talk: Dallas Cowboys: Stories from the Dallas Cowboys Sideline, Locker Room,...