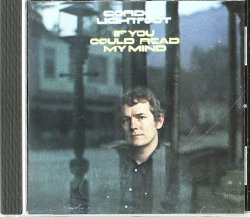 Out-of-print in the US. Though he eventually came to be regarded as an MOR pop artist, Canadian singer/songwriter Gordon Lightfoot emerged from the 1960s folk world, and had as much in common with Ian & Sylvia, Eric Andersen, and Bob Dylan as he did with any '70s AM wonder. Though the title track of IF YOU COULD READ MY MIND was indeed his first massive pop hit, the album proves that Lightfoot was a serious, substantive song craftsman. "Minstrel of the Dawn" is a "Mr. Tambourine Man"-like affair that closes on a surprisingly sarcastic note. "Sit Down Young Stranger" and "Cobwebs & Dust" are the folkiest cuts, and each bears an incisive, poetic lyricism. The bluesy "Baby It's Alright" and a cover of Kris Kristofferson's "Me and Bobby McGee" showcase Lightfoot's rootsier tendencies, while "Saturday Clothes" stands out by virtue of it's Bacharach-like melody and dinner-jacket chord progression. While he wasn't as edgy as fellow Canuck Leonard Cohen, Lightfoot was clearly a formidable song-poet.

The Bad Plus Joshua Redman
Because The Internet [2 LP]
The Very Best of Jackie Wilson
Wow Hits 2005: 31 of the Year’s Top Christian Artist and Hits
Bleach
Singing Bones