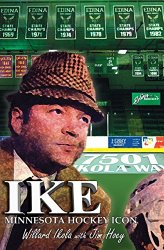 One of the legendary figures in Minnesota hockey history, Eveleth native Willard Ikola collaborates here with local author Jim Hoey to tell the story of his many decades in the game. Success always seemed to surround Ikola. He won three state titles as an all-tournament goalie for Cliff Thompson's Eveleth dynasty and then went on to win two NCAA titles with the Michigan Wolverines. After helping the U.S. take the silver medal in the 1956 Olympics, ''Ike'' coached hockey for 33 spectacular years at Edina High School. During that time his Hornets appeared in the state tournament nineteen times and amassed a record eight state titles along the way. Ike became a hockey legend, a ''gentleman'' coach as beloved for his modesty, class, integrity and signature ''houndstooth'' hat as he was admired for his teams' performances on the ice.

Do you want ot get the Ike: Minnesota Hockey Legend?