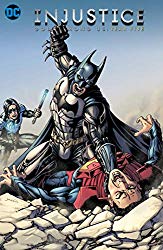 The endlessly epic saga of superhero dystopia inspired by the hit video game continues! This action-packed graphic novel collects the entirety of the fifth year of the now-legendary Injustice: Gods Among Us saga!In the war between Superman and Batman, all the heroes have decided where their loyalties lie. For five years, former friends and allies have fought bitterly, with casualties on both sides. Now, at an impasse, both Batman and Superman realize that to gain ground in their battle, they'll have to do the unthinkable--recruit their former enemies to attack their former friends!As Batman allies himself with villains who share his code against killing, such as Flash's Rogues, Superman makes a deal with the only man to ever break the Bat--Bane! But to draw Batman out of hiding, Bane will cross a line that can never be uncrossed.Experience the horror, power, and grandeur of Injustice as the story reaches its shocking conclusion. As action-packed as the video game phenomenon that inspired it, Injustice: Gods Among Us: Year Five: The Complete Collection tells the story of a world gone mad and the godlike men and women who seek to set it on the right track. Written by Brian Buccellato (Detective Comics) with art by Mike S. Miller (Adventures of Superman), Bruno Redondo (Titans), Tom Derenick (JLA), and more, this graphic novel collects the fifth and final year of the bestselling series in its entirety for the first time.