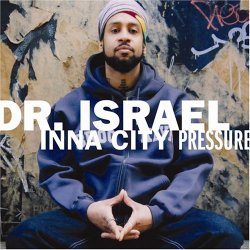 ROIR is proud to re-introduce one of the landmark albums of the last decade—remixed & remastered, w/ two bonus tracks (“Junglist” & “Jacob’s Ladder”) plus a new version of “Revolution”. Inna City Pressure was originally released by Dr. Israel in late 1998, at a time when the scene he was associated with (NYC’s “illbient” collective which included DJ Spooky, WE, Sub Dub, Spectre, Techno Animal, Badawi) was garnering major press attention. Of all the albums to emerge from that scene, this undoubtedly was and is the most important and, I would dare say, the best. Doc’s music is a fusion of world musics in the best possible sense. Dub/reggae, jungle/drum n bass, hip-hop, rock, punk & metal are all part of a completely organic whole, achieved with urgency, acumen, charisma and purpose. In fact, the album is so strong it should return some import to the terms “World Music” and “Fusion”—two terms whose meanings have been diluted, hyped and bastardized to the point of inconsequence. Doc’s ability to represent and reprocess his influences (Black Uhuru, Black Sabbath, Bad Brains, Run DMC, Roni Size) into compelling new forms is astounding. And what ties these styles of music together so organically? The answer is simple: Doc understands that what he loves about all music is BIG BASS and BIG DRUMS. He also understands how to implement that knowledge. It’s why Black Sabbath can be reimagined as a pot-smoking rasta chanting over drum ‘n’ bass beats. And why Doc is such a special musical mind. The rerelease of Inna City Pressure will be followed by a new Dr. Israel album entitled Dr. Israel presents Dreadtone International: Patterns of War, out October 18th, 2005. Patterns… is his first album in over 3 years and marks the continuation of a great & lengthy relationship with ROIR (those are Doc’s dreadlocks on the cover of ROIR’s first ever CD release—Dub Revolution: UK Roots). This new album by Doc and the young Brooklyn collective Dreadtone International is a new-school-meets-old-school marriage of roots, dub, trip-hop, rock, and R&B. Teaming up with vocalists Lady K and Chemda, along with an assortment of Brooklyn’s finest dub players, the good Dr. has created possibly his most accessible effort to date—an entirely new dub sound. Think Massive Attack vs. Fugees. Heavy heavy bass lines, thundering beats, beautiful melodies, pristinely produced vocals, and conscious lyrics paint an over-all soundscape which is as powerful as it is unique.

Everything Is 4 (Explicit)
La Evolución Romantic Style
Take the A Train
The Element of Freedom
Duck Season Vol. 3 (Parental Advisory)
Hope in Front of Me