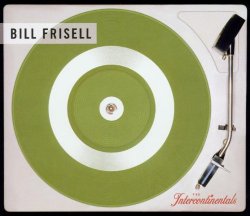 Fresh from the success of one of his fastst-selling releases with last year's THE WILLIES, Bill Frisell marks the recording debut of THE NTERCONTINENTALS - a band he formed in 2001 which made its debut at Seattle's Earshot Festival that fall. Their studio recording features original band members which include Brazilian composer, singer, guitarist and percussionist Vinicius Cantuaria; Greek-Macedonian musician Christos Govetas on oud, bouzouki and vocals; and Mali's Sidiki Camera on percussion and vocals, as well as subsequently-added musicians Greg Leisz on pedalsteel and slide guitars and violinist Jenny Schneiman.