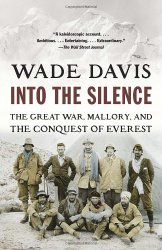 The definitive story of the British adventurers who survived the trenches of World War I and went on to risk their lives climbing Mount Everest. On June 6, 1924, two men set out from a camp perched at 23,000 feet on an ice ledge just below the lip of Everest’s North Col. George Mallory, thirty-seven, was Britain’s finest climber. Sandy Irvine was a twenty-two-year-old Oxford scholar with little previous mountaineering experience. Neither of them returned. Drawing on more than a decade of prodigious research, bestselling author and explorer Wade Davis vividly re-creates the heroic efforts of Mallory and his fellow climbers, setting their significant achievements in sweeping historical context: from Britain’s nineteen-century imperial ambitions to the war that shaped Mallory’s generation. Theirs was a country broken, and the Everest expeditions emerged as a powerful symbol of national redemption and hope. In Davis’s rich exploration, he creates a timeless portrait of these remarkable men and their extraordinary times.

Do you want ot get the Into the Silence: The Great War, Mallory, and the Conquest of Everest?

Riding Buffaloes and Broncos: Rodeo and Native Traditions in the Northern Great Plains
The Big Fat Surprise: Why Butter, Meat and Cheese Belong in a Healthy Diet
Hummelo: A Journey Through a Plantsman’s Life
Poisoned Legacy: The Fall of the Nineteenth Egyptian Dynasty: Revised Edition
Statistics for Business and Economics (8th Edition)
Criminal Investigation: The Art and the Science (7th Edition)