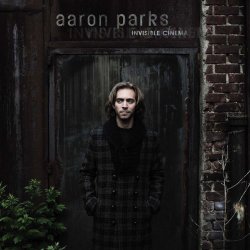 'Invisible Cinema' (2008), released on the legendary Blue Note label, is the debut album of American jazz pianist and composer Aaron Parks. Parks, already famous in Jazz circles for his early work with trumpeter Terence Blanchard , debuts here as leading his own quartet, featuring Eric Harland on drums, Matt Penman on bass, and Mike Moreno on guitar. The group is an intricate molding of interlocking histories, and that familiarity, along with their considerable chops, gives 'Invisible Cinema' a tight, soulful sound that brings their music to life. Though young, Parks proves himself a composer of depth, and a visionary for his group, exemplified by the wide variety of tracks, which draw comparisons across genres, moods and musical styles. The image-rich soundscape of 'Invisible Parks' features Parks not only on piano, but on mellotron, glockenspiel and synthesizers, underscored by a driving rhythm section in Harland and Penman. Fans of classic jazz will love the old school, tight knit playing on 'Invisible Cinema', and the youthful, dynamic energy of Park's composition is a sure bet for those just starting in the genre.