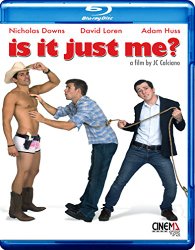 One of the funniest and sweetest gay romantic comedies in years, Is It Just Me? delivers a refreshingly witty take on one gay boy's search for Mr. Right. Cute, but unaware of his adorableness, Blaine (Nicholas Downs), a newspaper columnist can't seem to meet guys, let alone form a relationship. His beefy go-go boy roommate Cameron who has no shortage of willing partners can't understand why he doesn't pounce and enjoy some one-nighters. Instead, Blaine hides in his room and searches Internet chat rooms for a kindred spirit. He may have found one in the form of Zander, a shy recently relocated Texan. But when the time comes to exchange photos, Blaine accidentally sends an image of his hunky roomie, and things go from romantically promising to just confusing. This case of mistaken identity escalates when Blaine begs his roommate to go out with the charming, sandy-haired Zander. When it seems they hit it off, our lonely hero feels love has passed him by again... or did it? Think Cyrano de Bergerac by way of Eating Out, writer/director J.C. Calciano's first feature film is a hilarious, captivating winner. And the guys aren't bad either! Special Features: Director/Cast Commentary Deleted Scenes Original And Unofficial Trailer Auditions Scrap Book Cast Interviews