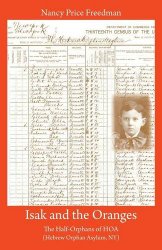 Young and old readers alike are fascinated by stories of life in an orphanage. In a carefully researched book about orphans and half-orphans at the turn of the last century, Nancy Price Freedman weaves an eye-opening tale of institutional life, based on the experiences of her father's siblings, who were "inmates" in the Hebrew Orphan Asylum of New York City. Interviews with other inmates of that institution reveal questionable childcare practices that were common in the early twentieth century and considered to be "for the good of the child." The story is told through the eyes of Isak, the only sibling to remain with his widowed mother, in the apartment of his Tante Anna and the abusive Uncle Lou. Isak longs to join his brothers and sister in the orphanage to escape Uncle Lou's beatings, until he learns about the horrors of institutional life, during his monthly visits. His siblings describe their hunger and fear in an orphanage that is supposed to protect their welfare, as well as the bullying there and in the public school they attend. His mother, whose weak heart prevents her from earning a living, is forced to watch helplessly as her children reach adulthood without her loving care and without each other. "Someday," she promises, "we will all be together again in a home of our own. I will come for you as soon as I can." As the inmates of the Hebrew Orphan Asylum reach their teens, they are encouraged to go on to college or to learn a trade, so they can support themselves when they leave. Although most are well prepared for their future, nothing can erase the terrors of their early life or the stigma of being an orphan. Isak and the Oranges is suitable for young people in the intermediate grades through high school. The story can be used for research on immigration, orphanages and childcare. It will appeal to adults interested in Jewish life at the turn of the last century. A glossary is provided for foreign words and unfamiliar terms. While this book is based on

Do you want ot get the Isak and the Oranges: The Half-Orphans of HOA (Hebrew Orphan Asylum, NY)?