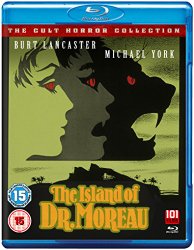 Crewman Andrew Braddock (York) survives the wreck of the sailing ship The Lady Vain. After several days at sea in a lifeboat, he reaches the shores of an island governed by the mysterious scientist Dr. Moreau (Lancaster). Though welcomed as an honored guest by Moreau, Braddock finds his contact with the natives increasingly disturbing, for they are not like any men he has ever seen before. Eventually, it becomes apparent that these men are, in fact, the hybrid products of Moreau s experiments upon various species of wild animals. Braddock becomes so shocked and curious that Moreau explains to him that he has invented a serum with a genetic human gene that can transform many wild animals into human beings giving them human characteristics. Braddock finds himself threatened by both the manimals and the sinister Moreau, who he suspects has plans to experiment on him.