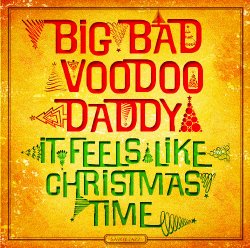 Amazon Exclusive Includes 2 Bonus Tracks - (What Are You Doing New Years Eve) and (Auld Lang Syne) Not Available Anywhere Else! Fans can also listen to Santa Claus is Coming To Town, Jingle Bells and Walking In a Winter Wonderland by checking out Big Bad Voodoo Daddy Artist Store.Big Bad Voodoo Daddy, purveyors of American big band, jumpin jazz and blues have a special holiday gift for naughty and nice fans alike. The multi-platinum selling, Grammy nominated band is back with a holiday album entitled It Feels Like Christmas Time, an all new recording for Savoy Jazz, featuring a mix of traditional favorites and original material.It Feels like Christmas Time, the bands tenth studio album, follows the release of Rattle Them Bones the record that put Big Bad back at the top of charts last year reaching #1 on the Jazz Album Chart on both iTunes and Amazon and was the highest debut on the Billboard Jazz Chart entering at #2.It Feels Like Christmas Time, produced by BBVD founding member and lead singer Scotty Morris with band-mate, pianist and arranger Joshua Levy and mixed by Morris, was recorded In Los Angeles at East West and Capitol studios. The album includes the Morris original It Feels Like Christmas Time, and features guest harmonies by vocal group She, Her and I as well as a duet with newcomer Anna Kasper on the classic & What Are You Doing New Year's Eve?; The album also features the crowd favorite Christmas Is Starting Now from Disneys Phineus and Ferb.