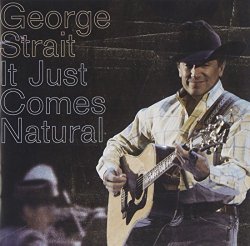 This year marks the 25th anniversary of George Straits first MCA Nashville album release Strait Country (1981). Now after 25 years of making timeless country music, selling over 62 million albums and scoring more solo #1 singles than any other recording artist in history, it is safe to say George isn't satisfied yet. George Strait's new album It Just Comes Natural is packed with 15 Strait-worthy tracks including the title track It Just Comes Natural and the soaring first single Give It Away. After the first week of release to radio, the single Give It Away was crowned the Number One most added on R&R and Billboard. The single has been scorching up the charts and reached Top 20 in only 4 weeks, making it Strait's fastest moving single of his career.