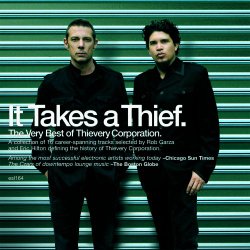 Dynamic DJ duo Thievery Corporation have announced the release of their first best of album, It Takes A Thief, coming out on ESL Music on September 21st. The album is a collection of tracks specially selected by Rob Garza and Eric Hilton for longtime fans and for music lovers who have heard of Thievery Corporation but may have never listened to the band. It Take A Thief features Lebanese Blonde, the beautiful song used on the Grammy award-winning Garden State Soundtrack, as well as Sound the Alarm, the funk infused track that has become a staple opening track for the band s live shows. We ve always been a little hesitant of putting together a retrospective cd, Rob Garza said. But looking back and realizing it s been almost 15 years since we started, we figured maybe now is the time. These tracks are some of our favorite moments. Thievery Corporation has released 5 studio albums to date and has sold over 1.5 million records since 1998. Thievery s tracks have been licensed for film, tv and advertisements including True Blood, Entourage, Six Feet Under, CSI, Skyy Vodka, Jaguar, Lexus, EA Sports and many others. They have collaborated with a diverse number of artists from The Flaming Lips to Femi Kuti, and remixed a spectrum of artists from the Doors to David Byrne. Their infectious live show features 15 musicians and a carousel of performers unlike any other live band playing today. In 2009, Thievery Corporation sold out 2 nights at New York s Terminal 5, and recently finished a 13 date European tour including Morocco, Rome, Athens, Paris, Berlin and Amsterdam. The band is preparing to announce a major US tour for the fall of 2010 and is recording a new album to be released in 2011.

Do you want ot get the It Takes A Thief.?

Recovery [Explicit]
Greatest Hits
This Is All Yours
Divine Decade
Silencio
The Good, The Bad & The Queen