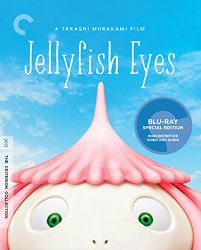 Takashi Murakami, one of the most popular artists in the world, made his directorial debut with Jellyfish Eyes, taking his boundless imagination to the screen in a tale that is about friendship and loyalty at the same time as it addresses humanity’s penchant for destruction. After moving to a country town with his mother following his father’s death, a young boy befriends a charming, flying, jellyfish-like sprite—only to discover that his schoolmates have similar friends, and that neither they nor the town itself are what they seem to be. Pointedly set in a post-Fukushima world, Murakami’s modest-budgeted special effects extravaganza boasts unforgettable creature designs and carries a message of cooperation and hope for all ages. DIRECTOR-APPROVED BLU-RAY SPECIAL EDITION FEATURES • New, high-definition digital master, with 5.1 surround DTS-HD Master Audio soundtrack • New interview with director Takashi Murakami • Two new behind-the-scenes documentaries on the making of the film • Trailer for Jellyfish Eyes 2 • New English subtitle translation • PLUS: An essay by critic Glen Helfand

Do you want ot get the Jellyfish Eyes (The Criterion Collection) [Blu-ray]?