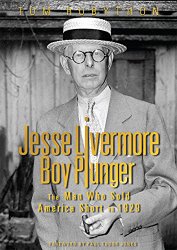 Livermore went bankrupt for at least the fourth time in 1934. Despite having amassed a fortune of $100 million by1929, Livermore was back where he started at 16. He did not seem to learn from hismistakes."—Victor Niederhoffer "That was the call of a lifetime, everyone was blind and deep into the crisis and Jesse Livermoremade $100 million going short when almost everyone else was bullish and then almost everyone else lost their shirts."—John Paulson "His stories of making millions, were the financial equivalent of “sex, drugs and rock ‘n roll” to ayoung man at the advent of his financial career."—Paul Tudor Jones "It was an amazing day on 24th October 1929 when Jesse came home and hiswife thought they were ruined and instead he had the second best trading dayof anyone in history."—John Templeton Who was Jesse Livermore?Jesse Livermore, was the most successful stock and commoditiestrader that ever operated on the stock markets. He was both theman who made the most money in a single day and the man wholost the most money in a single day. In fact he made and lost threegreat fortunes between 1900 and 1940. Singlehandedly he caused the two great Wall Street crashes of1907 and 1929, making millions from both. When he speculated hespeculated big and was known on Wall Street as the Boy Plunger.For a brief period in the early 1930s he was one of the world’srichest men with a personal fortune believed to be worth over$150 million, $100 million of that earned in just a few days fromthe Wall Street crash of 1929. In the end it was too extreme achange of fortunes for any man to cope with and Livermore shothimself in a New York hotel lobby in 1940 aged just 63. His legacycontinued and his son, Jesse jr later also committed suicide asdid his grandson, Jesse III. In the summer of 1929 most people believed that the stock market wouldcontinue to rise forever. Wall Street was enjoying a eight-year winning runthat had seen the Dow Jones increase 1,000 per cent from the start ofthe decade - an unprecedented rise. The Dow peaked at 381 on 3rdSeptember and later that day the most respected economist of the day,Irving Fisher, declared that the rise was “permanent”. One man vigorouslydisagreed and sold $300 million worth of shares short. Two weeks later themarket began falling and rising again on successive days for no apparentreason. This situation endured for a month until what became famouslyknown as the three ‘black’ days: On Black Thursday 24th October the Dowfell 11% at the opening bell, prompting absolute chaos. The fall was stalledwhen leading financiers of the day clubbed together to buy huge quantitiesof shares. But it was short-lived succor and over that weekend blanketnegative newspaper commentary caused the second of the ‘black’ dayson Black Monday 26th October when the market dropped another 13%.The third ‘black’ day, Black Tuesday 29th October saw the market drop afurther 12%. When the dust had settled, between the 24th and 29th October,Wall Street had lost $30 billion. Only much later did it became knownthat the man who had sold short $300 million worth of shares was JesseLivermore. Livermore had made $100 million and overnight became oneof the richest men in the world. It remains, adjusted for inflation, the mostmoney ever made by any individual in a period of seven days. This is thestory of that man.

Maybe Someday
101 Things to Do with a Dutch Oven
INTRODUCTION TO CRIMINAL JUSTICE
How to Get New Dental Patients with the Power of the Web Internet Marketing for Your Dental Practice
All Along You Were Blooming: Thoughts for Boundless Living
The General Course of World History [Russian Edition]