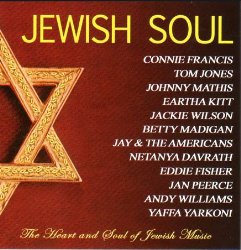 The Heart and Soul of Jewish Music. A unique compilation of the most popular Jewish songs as performed by some of the most famous recording artists in the world. "Jewish Soul" features world-renown artists who have achieve world-wide fame in the fields of Rock & Roll, Rhythm & Blues, Classical, Opera, and Popular music. The universal appeal of Jewish music is as old as Tin Pan Alley as exemplified by the fact that the inspiration for this compilation came from an artist not known as a "Jewish recording artist," Jackie Wilson, known as "Mr. Excitement," performing the Al Jolson classic "The Anniversary Song." Other selections include a soulful "Yiddish Mamma" by Tom Jones, Connie Francis' spirited performance of "Tzena Tzena" from her best-selling Jewish album and Eddie Fisher's #1 hit, "Oh My Papa." Two classic songs, one in Yiddish, "Eli, Eli" and one in English, "Where Can I Go?" are performed by Johnny Mathis. Included is the 1958 Top 40 hit "Dance Everyone Dance", an English version of the classic "Hava Nagila" by Betty Madigan and a stirring English-Yiddish version of "Where Is The Village" by Jay & The Americans. Who else but Eartha Kitt could sing "Rumania, Rumania" in YIDDISH and make it sexy and hilarious at the same time. Other artists include, Andy Williams, Jan Peerce, Yaffa Yarkoni and Netania Davrath. Included is an eight-page booklet with photos of the artists, lots of little-known information on the artists and the songs, and a few surprises as well.