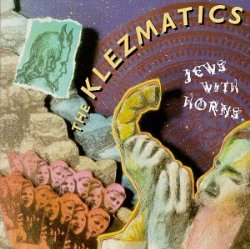 If Klezmer music resembles American Dixieland, German cabaret and Balkan dance bands, it's because Yiddish musicians of the 1910s and 1920s weren't afraid to borrow from the gentile music around them. Most of the modern klezmer revivalist bands prefer to preserve the hybrid form of the music as it crystallized before the Holocaust, but the Klezmatics think a '90s klezmer band should be able to borrow just as freely as a '20s band. As a result, Jews with Horns features guest appearances by such New York pals as Elvis Costello guitarist Marc Ribot and the members of Betty and Moxy Fruvous. The Klezmatics themselves have played with such diverse acts as Shockabilly, Music from Marlboro, Lester Bowie, John Zorn, LL Cool J, They Might Be Giants and the Zlatne Uste Balkan Brass Band. For all that, the irreverently pun-titled Jews with Horns is definitely a klezmer album. It features Yiddish lyrics, the usual instrumentation of clarinet, fiddle, accordion, trumpet, bass, and drums, and either traditional melodies or traditional-sounding tunes. The modern influence can be heard in the way these acoustic dance rhythms really kick and in the soloists' pursuit of high-energy excitement, even if it involves a little dissonance. --Geoffrey Himes