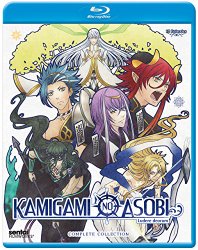 Yui Kusanagi isn't sure what to do after high school, but when Zeus decides that the Gods have lost touch with the mortal world, he stages a bit of divine intervention and places Yui on the path to education. Okay, it's more like he drops her into a mysterious garden and tasks her with teaching eight moody and extremely hot young Gods about life, humanity and love. Or else. That's quite a burden for any mortal girl, especially when the gorgeous Godly gaggle are eight heavy hitters from Greek, Norse, Egyptian and Japanese mythology: Appollon, Hades, Dionysus, Thor, Loki, Balder, Thoth, Anubis, Susanoo, and Tsukiyomi! But while they're all afflicted with the angst and capricious whims one might expect from such immortal archetypes, and while their "schooling" is further hampered as the mysterious world they're all trapped in keeps changing unexpectedly, Yui's going to give this her all. Why? Maybe because she's the only girl they're going to see in at least a year and did we mention that they're all totally babe-a-licious? Prepare to say O.M.G. with multiple Os and eight different Gs as higher education hits the highest plane in KAMIGAMI NO ASOBI!