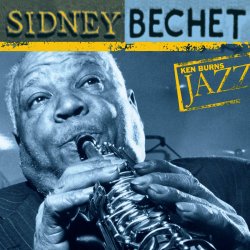 Sidney Bechet was one of the great pioneers of jazz, a New Orleans clarinetist of unmatched improvisational creativity who developed a highly personal voice on the difficult soprano saxophone. He could soar above an ensemble or develop lead lines with a power that rivaled trumpeters. Although he was the first great jazz soloist to record--on 1923's "Wild Cat Blues" with Clarence Williams's Blue Five--until the late 1930s, Bechet's recordings cast him invariably as a sideman. He wouldn't achieve the kind of fame that was his due until he settled in France in the 1950s. This is an excellent introduction to his work, ranging from that first extant recording to 1947. Along the way, there are early meetings with Louis Armstrong and recordings like "Shag," a spirited performance in the New Orleans ensemble style with trumpeter Tommy Ladnier and the New Orleans Foot Warmers. Some of Bechet's best work of the '30s appeared under the name of singer Noble Sissle, even when Sissle wasn't present, as on "Viper Mad," but it's Bechet's distinctive work that gives these period pieces their enduring significance. While he spent much of his career cast in the New Orleans style, Bechet was an innovator, using electric guitar in the band for his own 1938 classics "Chant in the Night" and "Jungle Blues." He finally had something like a hit when he recorded Gershwin's "Summertime" in 1939, the rich wail of his soprano both plaintive and commanding. The same distinctive way with a popular song is evident on "Love for Sale" with just a rhythm section, while there are other 1940s recordings with a host of distinguished collaborators, such as trumpeter Muggsy Spanier and trombonist Vic Dickenson. --Stuart Broomer