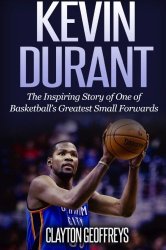 Learn the Incredible Story of Oklahoma City Thunder Superstar Kevin Durant! Read on your PC, Mac, smartphone, tablet or Kindle device! In Kevin Durant: The Inspiring Story of One of Basketball's Greatest Small Forwards, you'll read about the inspirational story of basketball's star, Kevin Durant. Kevin Durant has been the face of the Thunder dynasty since entering the league in 2007 as the second overall pick. Since then, the Oklahoma City Thunder have come a long way, becoming one of the perennial Western Conference contenders. Playing alongside athletic and talented players like Russell Westbrook, James Harden, Serge Ibaka, and Reggie Jackson, Durant has had the opportunity to lead his team to several deep playoff runs behind the helm of Coach Scott Brooks. While they have not won a championship quite yet as of the 2015-2016 NBA season and while there have been personnel changes including new head coach Billy Donovan, the dynamic duo of Durant and Westbrook always keep the Thunder in the playoff picture. In this book, you’ll learn about Kevin’s incredible story to the NBA. Kevin Durant has had an incredible basketball career playing in the National Basketball Association. In this short book, we will learn about how Kevin became the star MVP small forward that he is today. Starting first with his childhood and early life, we'll learn about Kevin Durant prior to entering the NBA, his time in the NBA, along with his impact on Oklahoma City. Here is a preview of what is inside this book: Early Life and Childhood High School Years College Years at the University of Texas Kevin’s NBA Career Kevin Durant’s Personal Life Duran’ts Impact on Basketball and Beyond Kevin Durant’s Legacy and Future An excerpt from the book: Basketball eras aren’t divided by time; they are remembered by rivalries and names: Russell versus Chamberlain, Magic versus Bird, Michael Jordan vs. The Pistons, and even the Lakers internal rivalry of Kobe vs. Shaq. The NBA is a league driven by its stars and more often, it takes more than one hard court idol to lead it. The current driver of the league is Cleveland Cavaliers superstar LeBron James, who in his ten years in the league, has been NBA champion twice and named the NBA’s Regular Season MVP four times in the last six years. James asserted his dominance as a basketball player right from the moment he stepped onto the NBA’s hardwood, although it was only in 2010 when he moved to the Miami Heat that he officially took the crown as the NBA’s King. But just as King James ascended to his throne, a second superstar emerged to challenge him, and just like in the old days of the NBA, a new rivalry was born. Oklahoma City Thunder forward Kevin Durant has entered the picture and cast himself as the lone and legitimate challenger to King James’ crown. Although Durant had been in the league since 2007, their battles began when James moved to South Beach and bested Kevin Durant to win his second MVP award in 2010. After the Chicago Bulls’ superstar point guard Derrick Rose snapped LeBron James’ back to back MVP victories in 2011, Durant finished second place to James once again for the next two seasons. Tired of always being the bridesmaid to James, Durant exploded like an atom bomb in 2014 and finally dethroned King James as MVP after four attempts. The 2014 MVP voting wasn’t even close as Durant collared 119 out of a possible 125 first place votes and bested James 1232-891 in the final tally to bag his first ever NBA MVP award. Tags: Kevin Durant, Russell Westbrook, Oklahoma City Thunder, Scott Brooks, Serge Ibaka, James Harden, Reggie Jackson, University of Texas Basketball, Seattle SuperSonics, LeBron James, Carmelo Anthony, Derrick Rose, Chris Paul

Do you want ot get the Kevin Durant: The Inspiring Story of One of Basketball’s Greatest Small Forwards?

LeBron James: The Inspiring Story of One of Basketball’s Greatest Players
The Annotated Build-It-Yourself Science Laboratory: Build Over 200 Pieces of Science Equipment! (...
The New York Times Tons of Puns Crosswords: 75 Punny Puzzles from the Pages of The New York Times
evo: Supercars: Behind the wheel of the greatest cars of all time
Super Baby Food
Best Anchorages of the Inside Passage -2nd Edition (Ocean Cruise Guides)