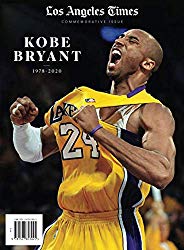 This product is an authorized edition published by the Meredith Corporation and sold by Amazon. This edition is printed using a high quality matte interior paper and printed on demand for immediate fulfillment. This commemorative special edition honoring basketball legend Kobe Bryant is divided into two sections: "Kobe Is Gone, Never to Be Forgotten," which includes intimate coverage from the week of Bryant's death, including appreciations of both Kobe and his daughter Gianna, as well as reporting on Kobe's second act as a devoted family man, producer, businessman and his complicated legacy both on and off the court. The next section, "Kobe as He Was, as He Always Will Be" collects expert and one-of-a-kind reporting from the Los Angeles Times archives that chronicle Kobe's journey from rookie to All-Star, Olympic Gold Medalist and MVP. Throughout, with words and photos, fans will be reminded of how Kobe came to define Los Angeles, a city that embraced his ethos, even as he became a figure of huge international renown. The coverage, which no one but the Los Angeles Times could deliver also looks at Kobe's special relationship with his daughter Gianna, who, encouraged by Kobe, shared the same enthusiasm for basketball that he did. For anyone with the appreciation of basketball and Kobe's deep contribution to it, this special edition is essential.